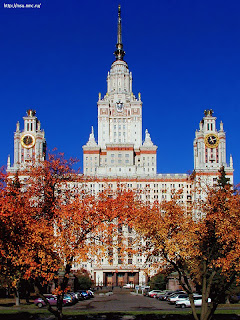 The Moscow State University (MSU) supercomputer, Lomonosov, has been selected for a high-performance makeover, with the goal of nearly tripling its current processing power to achieve petaflop-level performance in 2010. T-Platforms, who developed and manufactured the supercomputer, is the odds-on favorite to lead the project.

With a current Linpack mark of 350 teraflops (peak: 420 teraflops), Lomonosov needs to generate an additional 650 teraflops of performance to achieve its goal. No small task. So far, there are only two computers that have broken the Linpack petaflop barrier, Jaguar at Oak Ridge National Lab, which holds the number one position on the TOP500 list, and Roadrunner at Los Alamos National Lab, with the number two spot. Lomonosov ranks 12th on the most recent edition of the TOP500 list and is the largest HPC system in the CIS and Eastern Europe.

Officials at Moscow State University held a meeting this week in order to establish a budget for the petaflops revamping of the Lomonosov system. According to Russian State Duma Speaker Boris Gryzlov, MSU has prepared a feasibility study on the effectiveness of creating a petaflops supercomputer, and the matter will be brought up to the President and Chairman of the government for approval.

Total university funding in 2010 from the Russian federal government will amount to 1.5 billion rubles ($51 million). The anticipated cost of increasing the computer's performance to reach petaflop-level is about 900 million rubles, or almost $31 million, according to Moscow State University President Victor Sadovnichy. MSU has already invested 350 million rubles ($12 million) in the Lomonosov system, and the total project cost so far is 1.9 billion rubles ($65 million). MSU is ready to provide up to a quarter of the cost of hardware, said Sadovnichy. 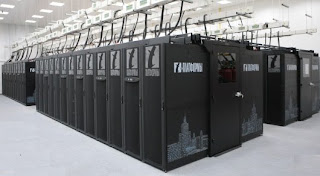 Apparently, the amounts specified to upgrade the system refer only to the procurement and installation of equipment, and do not include system maintenance and electricity costs. Current power requirements are around 5 MW, which, according to Sadovnichy, is comparable to powering a small city.
"Lomonosov" and its predecessor "Chebyshev"  are responsible for many research breakthroughs, including an inhibitor of thrombin (a substance retarding the effect of the main component of blood clotting), as well as the development of urokinase, a possible cancer treatment. In addition to these undertakings, Lomonosov has been kept busy modeling climate processes, factoring large integers to solve cryptographic problems, and calculating the noise in turbulent environments.

The renovation work for transforming Lomonosov into a petaflop system is being put to a competitive bid, but is seems likely that T-Platforms will get the contract since it is the only Russian manufacturer with the know-how to implement such a project. And there's a partiality toward assigning work to national interests. State Duma Speaker Boris Gryzlov, who backs the creation of a domestic petaflop supercomputer, prefers to support domestic producers of supercomputers, and urged caution against the procurement of foreign goods.
Mikhail Kozhevnikov, commercial director for T-Platforms, has already prepared a bid and decided upon an upgrade path for the petaflop system. The details of the proposed architecture have not been publicly declared, however a good guess would be that they're going to add new nodes based on the Westmere EP Xeon processors Intel just announced.

Specifically, since the current MSU super is based on the T-Blade2, Xeon X5570 2.93 GHz, it's not unreasonable to think they're bidding T-Blade3 blades using Xeon X5670 2.93 GHz parts (note, the T-Blade3 don't actually exist yet). Since the new Xeons only deliver about 40 percent more computational performance per blade than the existing ones, they'll still need a bunch more servers. Alternatively, they could be thinking about upgrading with the upcoming NVIDIA Fermi GPU server boards, due out in May. That would get them to a petaflop with a lot less hardware. (A dual-socket X5670 server would yield about 250 DP gigaflops; a 4-GPU Fermi server would probably deliver over 2 DP teraflops.)

Russian Prime Minister Vladimir Putin has allocated 1.1 billion rubles ($37 million) to develop supercomputer technologies in Russia, according to a recent APA report, further demonstrating Russia's desire to possess a world-class computer system, one that may be capable of a place among the top 5 of the revered TOP500 list. Barring any unforeseen circumstances, it looks like the Lomonosov upgrade will go forward, and Russia will take its place on the exclusive short-list of petaflop systems. But, in HPC, the final goal is always a moving target, as other groups also race for the coveted petaflops level and beyond.


(This article sourced from HPCwire.)